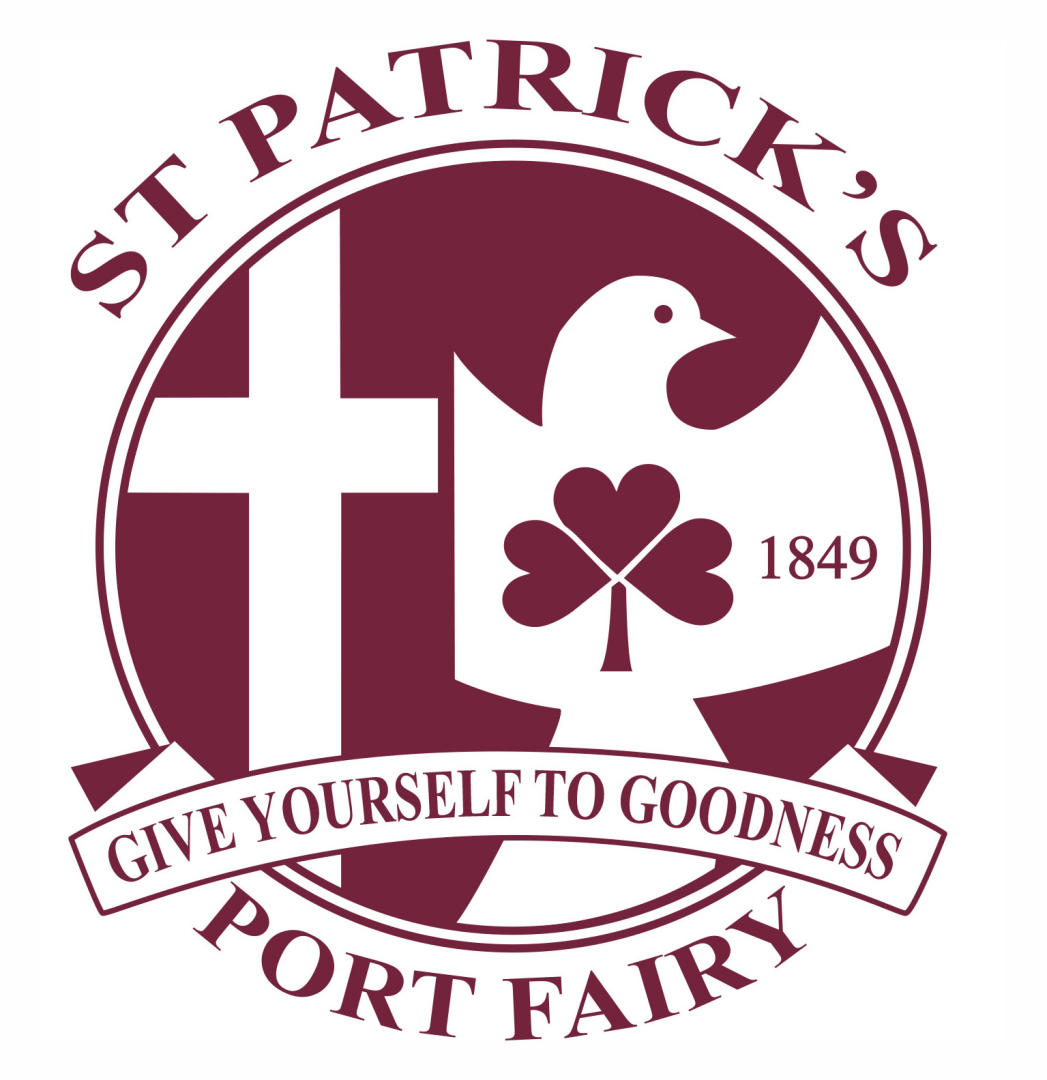 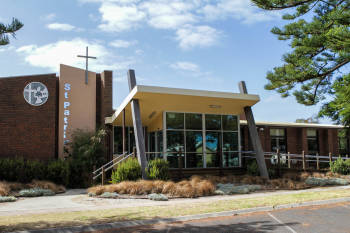 We Acknowledge the Gunditjmara people, the Traditional Owners of the land on which we are gathered today.

We respect and honour Aboriginal and Torres Strait Islander Elders, past, present and future. We acknowledge their stories, traditions and living cultures on this land and commit to building a brighter future together.

From The Principal - Olga Lyons 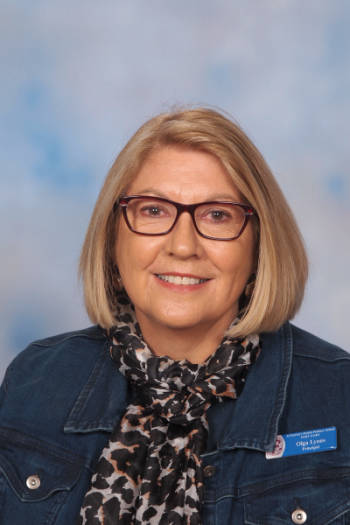 We are very grateful that we are all still onsite so far this week and returning to a calm sense of normal.  Our thoughts and commiserations are with our Melbourne families, friends and colleagues as they continue in lockdown.

Congratulations to the group of Year 5 students who celebrated their First Eucharist last Sunday.  We were fortunate to fit in both Confirmation and Eucharist this year.

I enjoyed watching 3 games at the 5/6 Hoop Time on Tuesday morning.  I was very proud of their skills and sportsmanship.  Thank you to their coaches and Mr. Greene for supporting the teams.

Thanks you to the parents who came along to our working bee last Saturday. We managed to tick off all of the major tasks that needed to be done prior to beginning construction in term 4.   We have a site meeting with MortonDunn Architects this week and the tendering process has begun.

I'd like to acknowledge those who took the time to provide positive and encouraging feedback to our teachers following the last 2 Remote Learning periods. It is much appreciated as we continue to refine our learning online approach in collaboration with the Warrnambool and District Catholic Schools Network.  The revised protocol further down in this newsletter is a response to the fact that we seem to be receiving sudden and late notice of closures.

What If They Are Ahead? 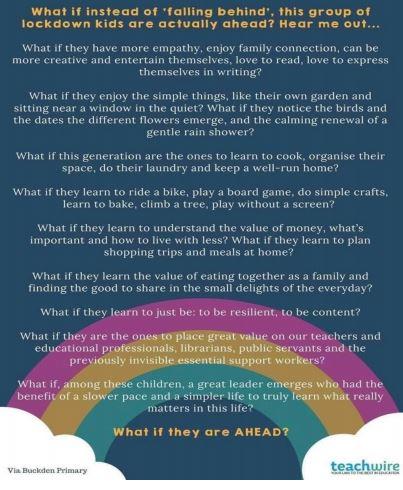 From The RE Leader - Eliza Dwyer 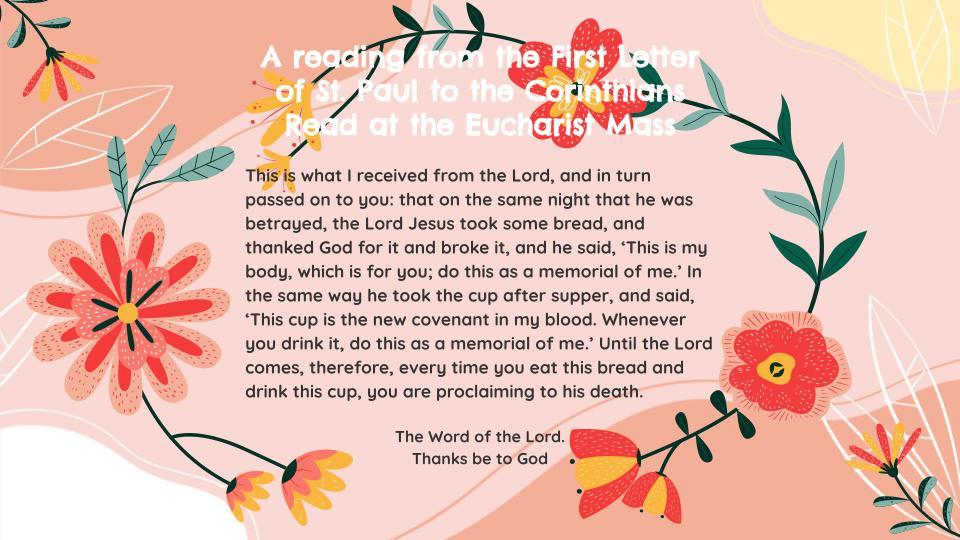 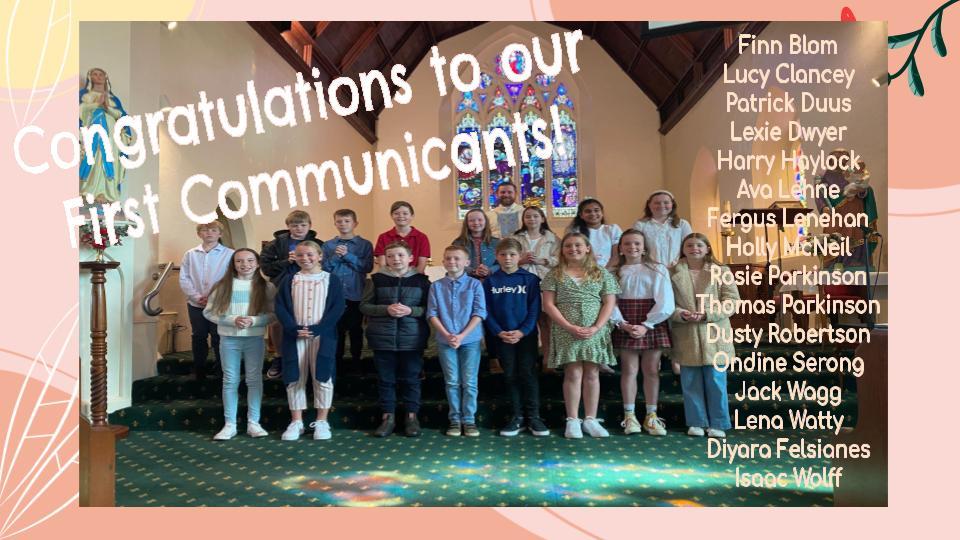 Congratulations to the Year 5 & 6 students who made their First Eucharist on Sunday.  Thank you to Miss Dwyer for organising this program and the ceremony.  Thank you also to Fr. John for supporting the children and their families. 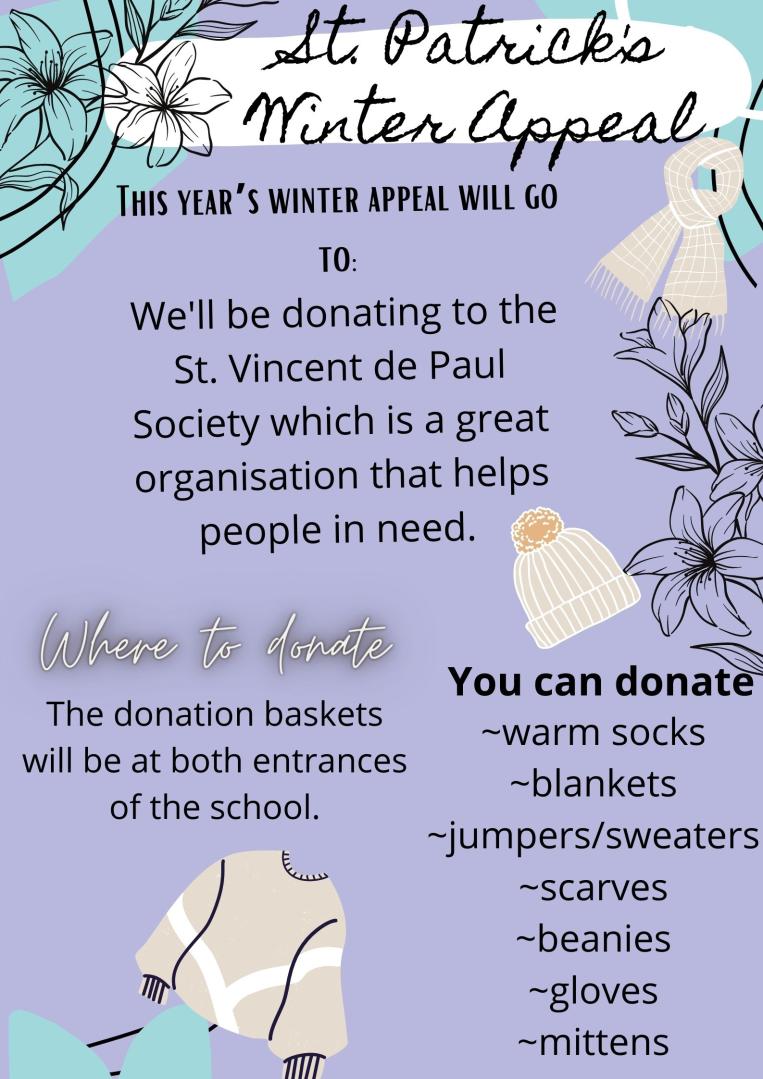 Our Diocesan Community No. 64 July

https://www.ballarat.catholic.org.au/wp-content/uploads/2021/08/ODC-July-2021-web-hr.pdf
In this week’s School Newsletter we have included a link to the new online format of the Catholic Diocesan magazine. The magazine begins with a very poignant COVID reflection by Bishop Paul Bird and there are lots of interesting articles on the Catholic schools around the Diocese. 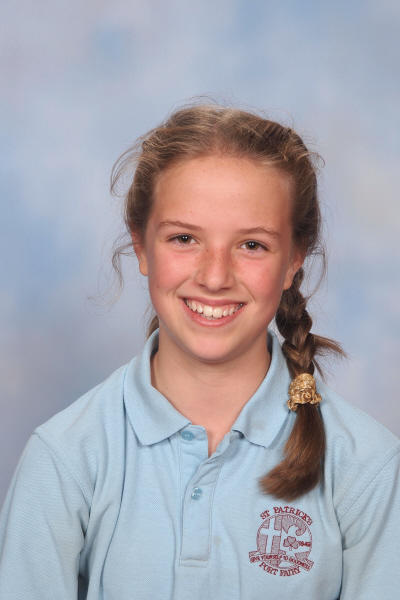 Isla McCall from Yr 6 was this week’s Yard Dojo winner. Isla was spotted by Mr Lucardie using a kind tone and assisting younger students to play collaboratively in the yard. Well done for your leadership Isla.

https://www.esafety.gov.au/parents/webinars
Free webinar for parents and carers of primary and secondary school students. Understand the risks when using apps like Tik Tok, Snap Chat, YouTube and Instagram. This webinar also covers strategies for staying safer on social media and how to report if something goes wrong. 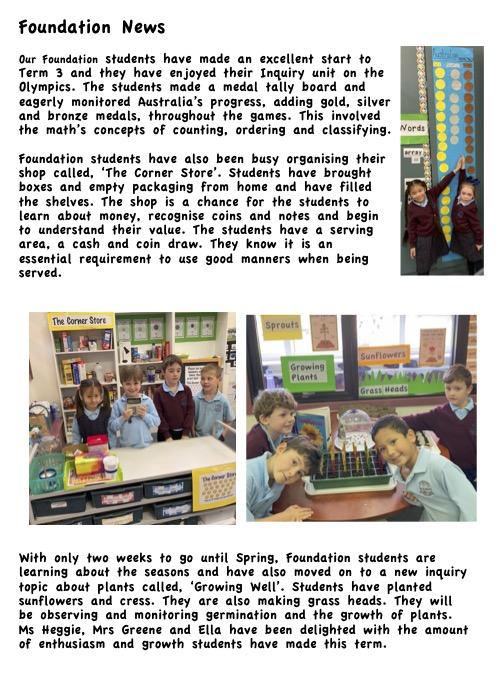 Why Children's Book Week Is Important

Each year since 1945 the CBCA has brought children and books together across Australia through CBCA Book Week. During this time schools and public libraries spend one glorious week celebrating books and Australian children's authors and illustrators.

Book Week 2021 runs from 21-27 August and this year asks your children to embrace the theme 'Old Worlds, New Worlds, Other Worlds'. This exciting invitation opens a world full of possibilities when it comes to kids book week theme ideas.

Students will have an opportunity to create ‘wish lists’ by browsing the books available for purchase Monday 6th September -  Tuesday 7th September in our school library. St. Patrick's will showcase our students’ in their book character outfits on Tuesday 14th September with a grand parade, following our annual Book Fair.

Stuck for ideas? Look at Pinterest, make your own costume, adapt what you have in your wardrobe. Keep it fun and simple. There will be prizes for creative/homemade Book Week costumes and encouragement awards. 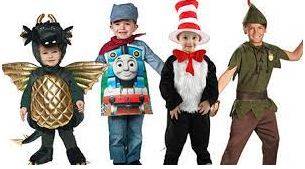 Children can come to school dress up as their favourite Book Character on September 14 to celebrate the end of our Book Week Fair.

This week Yr 5/6 had a special presenter, Bree Porter, come into our classrooms to introduce us to her new project, Hydrogen Research. Hycel have partnered with Deakin University to establish a huge new project, hydrogen research and development into clean energy and transport innovation. (Hydrogen is an important part of a clean energy future because it can be used to effectively store renewable electricity, supporting flexibility across the grid, as well as creating clean liquid fuels for use in transport.)

Bree used demonstration mini cars to show our students how water can be separated from its hydrogen and this hydrogen gas can then be stored in a fuel cell and used as a fuel to power the mini cars. Our students certainly learnt a lot about creating clean fuels to power machines 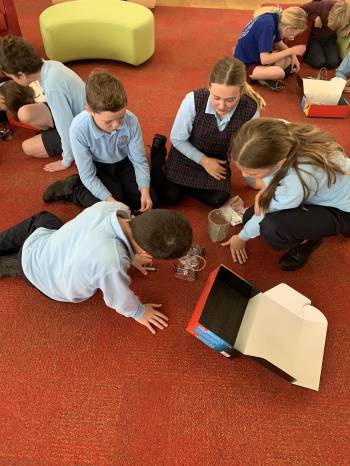 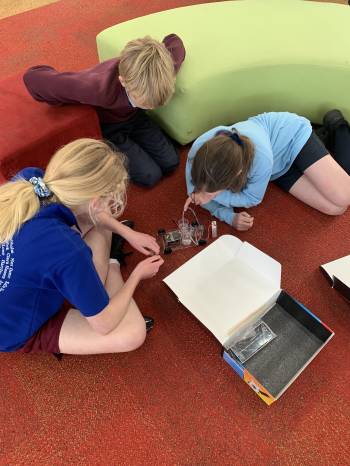 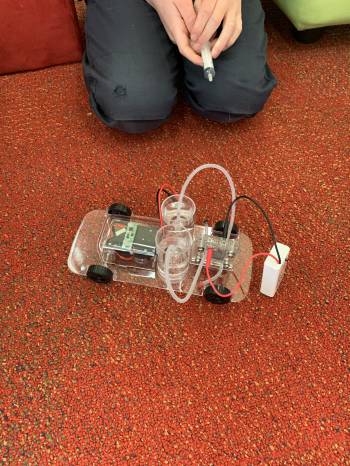 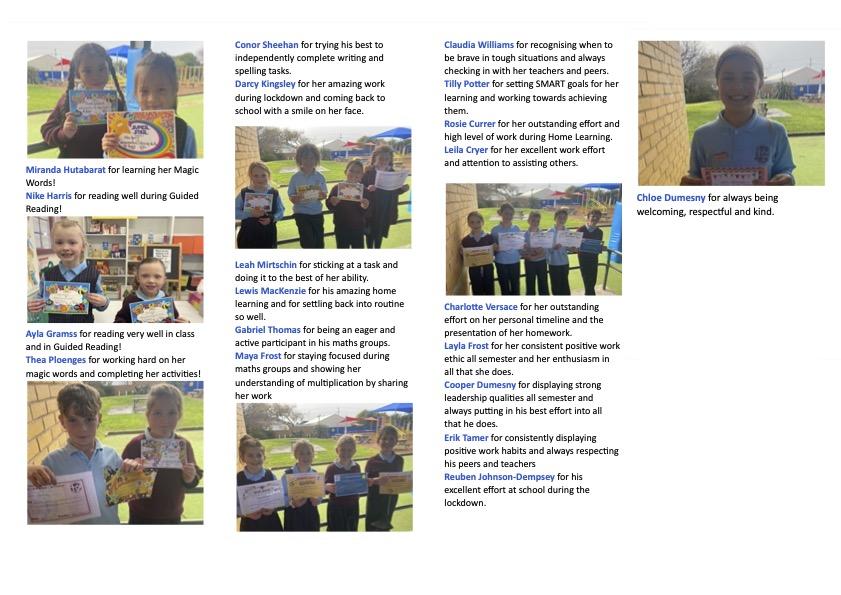 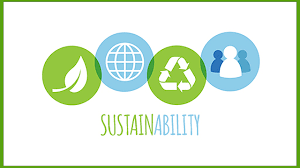 We no longer have the Wonder Bread bag bin but you can still bring your bread bags in just put them in the soft plastic bin.

If you have any of these items for recycling, drop  them at the Recycle Station outside the ICT lab.

If you have any questions you can ask the Sustainability Leaders, Jorja and Andrew or Mr Steere.

St Patrick’s boys came away as 2021 Moyne Schools Hoop Time champions this Tuesday, 17th August, at the Warrnambool Basketball Stadium.  The boys were undefeated all day and defeated Port Fairy Consolidated in the Grand Final.

Our girls team played four games and lost by a point in 1 game and drew with Port Fairy Consolidated in another but were comfortably beaten twice by St Patrick’s School Koroit.

Our team of mixed boys and girls in the Future Stars section won 2 games, lost 1 and drew 1 but were not able to scrape into the finals.

Our team of Rookies, another mixed gender team, played 5 games and won 3 and lost 2.  There were no finals played in the Rookies section of the competition.

As usual our St Pat’s children displayed great sportsmanship, competitive spirit and support to one another on the day.  Thanks to Mr Steere, Tom and Ms Lee for coaching on the day.

Tomorrow history will be made when the first ever all-girl’s Aussie Rules football team from St Patricks, Port Fairy will compete in a Warrnambool and District Primary Schools competition for Girl’s Football.  The girls are very excited and looking forward to it. The day will be played at the Mack Oval in Warrnambool, and our Year 5 & 6 girls will play 3 games against St. Joseph’s Warrnambool, Warrnambool East Primary School and St Patrick’s Primary School Koroit.  We are one of eight competing schools in two pools of four.  The two leaders of each pool will play in a Grand Final. 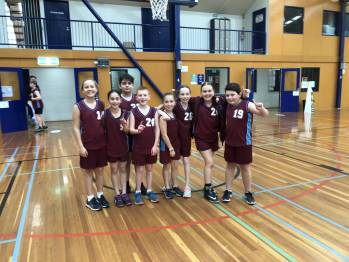 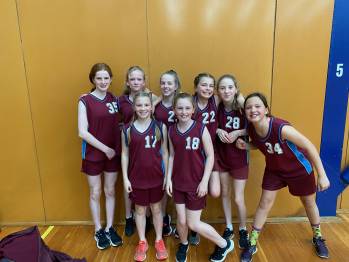 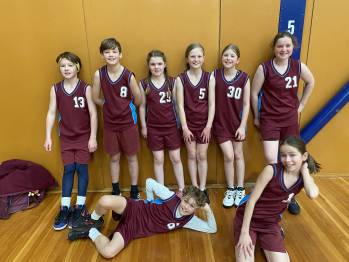 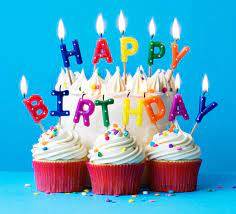 St Patrick's inline with our Healthy Eating Policy & Oral Health Policy would like to make parents aware about food brought into the school for student birthdays.  There is to be no food, cakes or lollies, brought into the school to share with their classmates. We also need to consider the number of children with allergies and the school needs to ensure everyone's safety.

Birthdays will still be celebrated by their teacher and classmates with a birthday song and recognised at our assemblies. 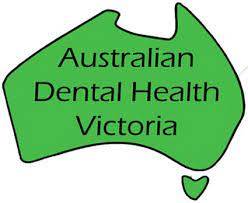 Our school is participating in the Australian Dental Health Victoria program. A dental van will visit the school on Monday November 22. The School Dental Initiative forms were sent home with your child, if this has been misplaced, you can collect one from the office.

This is a voluntary program and if you wish for your child to be part of the program please return your form to your child's teacher by Monday October 18. 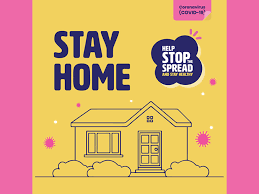 Stay at Home if you are Unwell!

Just a reminder, that if your child is showing any signs of a cold or the flu, they are to stay at home.

Under the Victorian Government guidelines & CECV School Operations Guide restrictions, we are unable to have school assemblies. 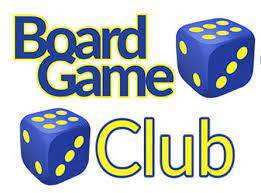 Board Game Club is on every Wednesday from 1.45pm-2.15pm in the Library. Students need to write their name on the Sign Up sheet outside the ICT Room. Only the first 25 student will be able to join in. 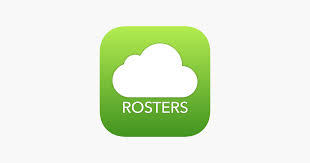 Library Reshelving - Shelving can be done at anytime during the week of:

NO LIBRARY SHELVING AT THIS TIME DUE TO COVID RESTRICTIONS

Sickbay Linen - the linen will be sent home with your child the Friday you are rostered on. 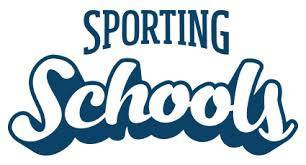 SPORTING SCHOOLS WILL BE ON WEDNESDAYS AND THURSDAYS FOR TERM 3. THE SPORTS FOR THIS TERM WILL BE BASKETBALL AND GYMNASTICS.

Attendance forms are located on the Skoolbag App. Attendance slips must be filled out by 10am for each day your child is attending Sporting Schools. Any child without an attendance form will not be permitted to attend. 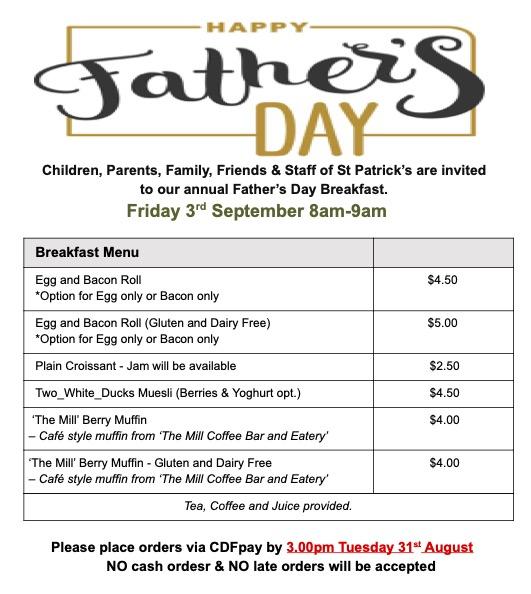 P & F Dates for your Diary

https://austparents.schoolzineplus.com/news?nid=20
Visit this link to view the latest newsletter from Australian Parent's Council.

Instantly translate this newsletter to 100+ languages

With our Google Translation integration, your community can access your newsletter in ANY language. Simply scroll to the bottom of the newsletter preview to give it a try. 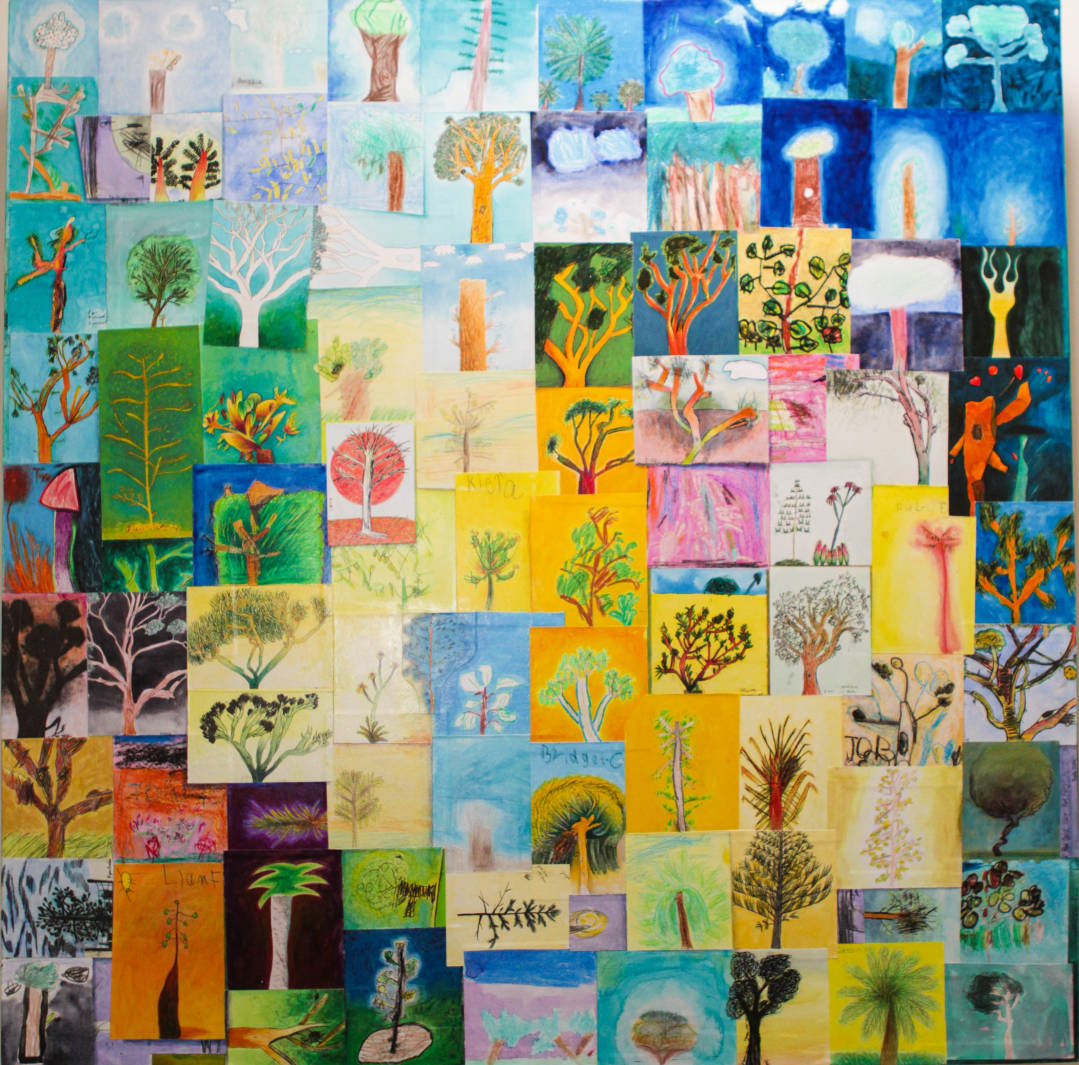 Give Yourself to Goodness 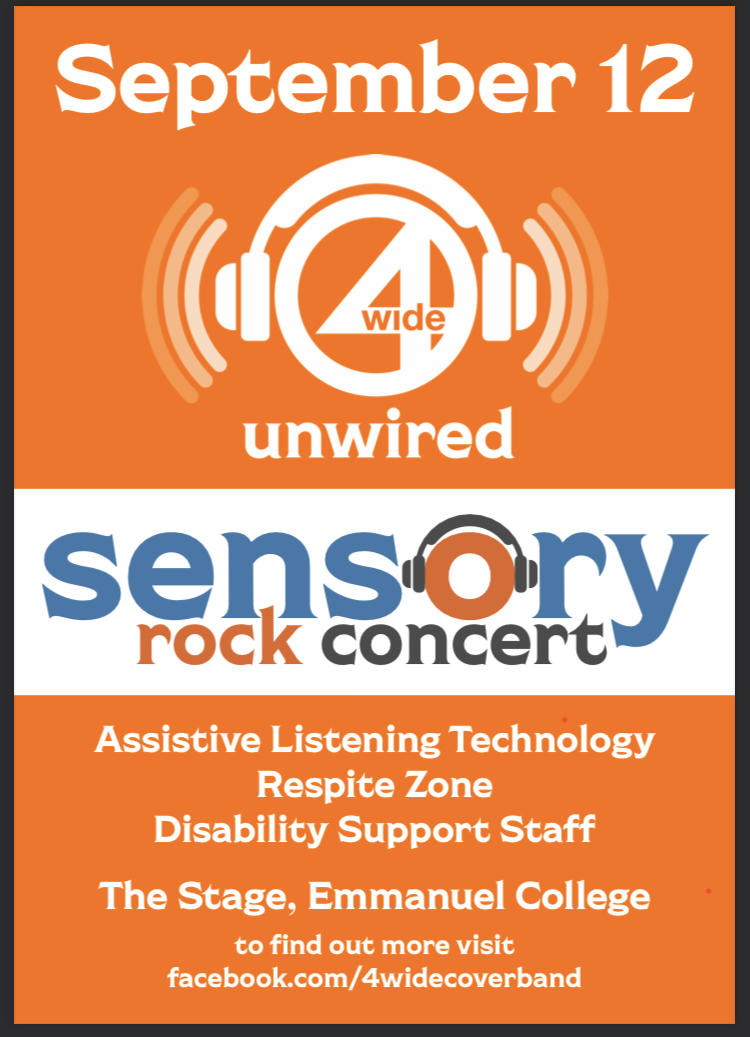